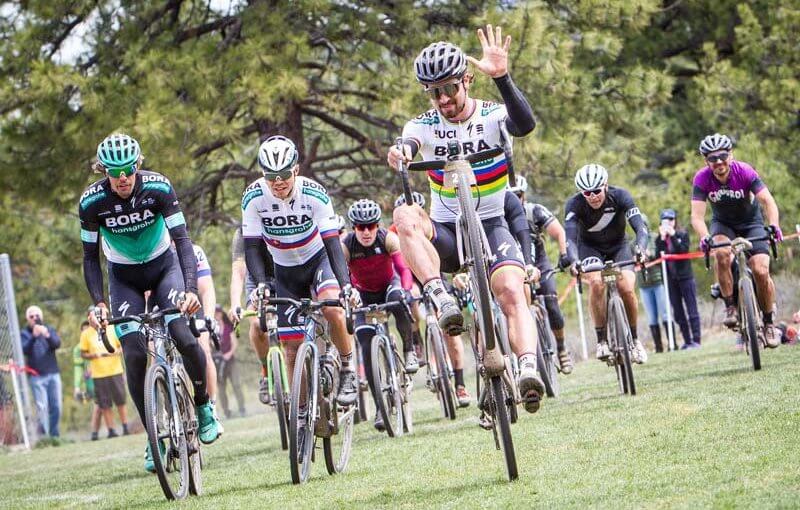 Photo above: Peter Sagan has some skills! (by: Craig Huffman/Bike Monkey) 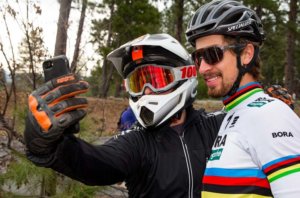 Two weekends ago the inaugural Sagan Dirt Fondo was held in Truckee, California. In case you’re not familiar with the name, Peter Sagan is one of the greatest professional cyclist of our generation, if not in the sport’s entire history. In a professional career spanning barely a decade, Sagan has already won three consecutive world titles (a first for any cyclist), numerous Tour de France stage wins and most recently, the 2018 Paris Roubaix. Sagan is also the only cyclist you’ll ever see doing a no-handed wheelie up a mountain pass in the Tour de France, taking hand-ups from adoring fans. The guy is a bona-fide bike magician, and his cycling roots are in mountain biking.

Although he is a native of Slovakia, Sagan has fallen in love with California because of all the training he does here. To help showcase his second home, the inaugural Sagan Fondo cycling event on May 5 was a mix of dirt, gravel, pavement, rocky jeep road and even singletrack, with a medium and long route starting and finishing in Truckee. The long route went all the way to Loyalton in Sierra County, and used a 2.5 mile section of singletrack, the historic Boca & Loyalton Railroad grade. This is a trail that the Stewardship did restoration work on four years ago, but since then, not many people have used the trail. However, during the Sagan Fondo, nearly 400 cyclists rode the Boca & Loyalton, with many folks giving feedback that it was their favorite part of the entire 68-mile ride.

The Boca & Loyalton Railroad was constructed in 1901 and ran until 1916, transporting lumber from the Loyalton mill to the main railroad route near Boca (near today’s Hirschdale exit off Interstate 80). In 1994, much of the historic railroad was destroyed by the Cottonwood Fire. Although it suffered heavy damage, much of the route is still there, and the vision we have for this route is to fully resurrect it, providing a singletrack dirt connection between Truckee and Loyalton.

Since the lumber mill shut down more than a decade ago, the story of Loyalton is much like the rest of the Lost Sierra; a struggling economy in search of more recreation opportunities. It was especially awesome to see all the riders in the Sagan Fondo experience the remarkable beauty of Smithneck Canyon and the Boca & Loyalton trail. In addition to designing the course for the Sagan Fondo, the Stewardship also ran the aid station at Smithneck Creek Park, coordinated the on-course medical logistics and brought out a team of moto riders to support the cyclists. It was an awesome partnership between the Stewardship, Sierra and Nevada Counties, Tahoe National Forest (Truckee and Sierrraville Ranger District), Santa Rosa-based event promoter Bike Monkey and of course Peter Sagan.

The inaugural event was a great success, and Bike Monkey will be making a financial contribution to the Stewardship for our efforts. We plan to use this contribution to continue restoration work on the Boca & Loyalton, while pursuing other trail opportunities in the Loyalton area. Badenaugh Canyon Trail has enormous potential, what used to be a 2,000 vertical foot singletrack descent off Babbitt Peak at 8,750 feet elevation, but the Cottonwood Fire also destroyed that trail in 1994. We are hoping that through the growth of the Sagan Fondo and the visibility of Peter Sagan, it will help the Stewardship create more recreation opportunities in Loyalton.

Next year we plan to run the Sagan Fondo route through Loyalton, engaging the community more with the event. The town wants to be part of something positive like the Sagan Fondo, and the Stewardship wants to engage both the community and event participants. Because this engagement will help create more trails for everyone to use and enjoy. Now if we could just get Peter Sagan to come and ride Downieville on his mountain bike, that would be pretty awesome!