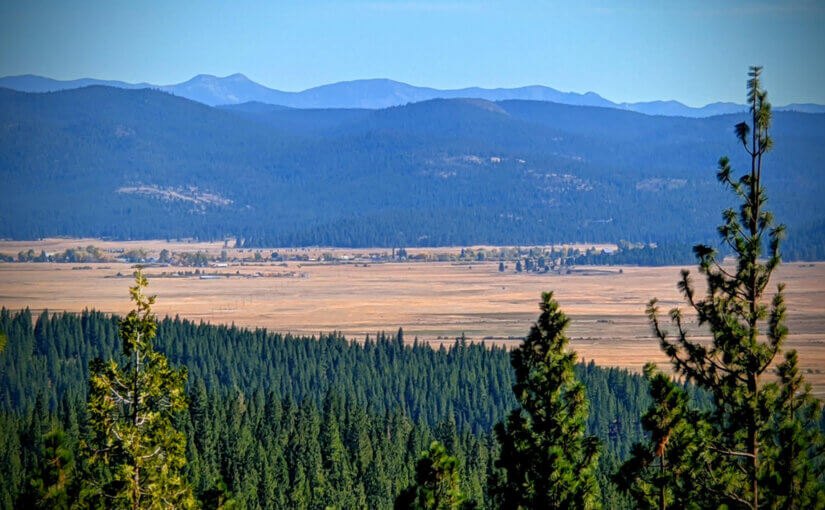 Once home to the only traffic signal in all of Sierra County (a flashing red light), the ranching community of Sierraville counts more heads of livestock than it does human residents, which numbers about 200. Situated at the intersection of California State Highway 49 and 89, Sierraville is located in the south central corner of the Sierra Valley at 5,000 feet above sea level; one of the largest sub-alpine meadows in North America and an ancient lakebed the size of Lake Tahoe that existed during the Ice Age.

Today, the Sierra Valley is the headwaters of the Feather River, a Wild and Scenic River, with its dozens of marshes and springs draining into the waterway towards Portola. The biodiversity of the Sierra Valley makes it famous for attracting a wide range of migratory species of birds.

William Arms was the early developer of Sierraville, owning a majority of the land in the settlement, constructing a general store, hotel, blacksmith shop and a public hall. Arms also established the first post office and became Sierraville’s first Postmaster in the late 1860s. Arms’ ranches grew large amounts of hay and grain to supply the mining camps of Virginia City and Carson City. Arms also had interests in lumber and made a handsome business supplying the aforementioned Nevada mining towns with Sierra Valley timber. There were many other family-owned ranches in Sierraville during the Gold Rush era, many of which are still owned by the same families to this day.

Sierraville was an early pioneer of recreation as a resort destination thanks to Campbell’s Hot Springs just to the southeast of town, known today as Sierra Hot Springs. As one of the first established resorts in the region, the sulphur springs were discovered by settlers and developed by Corel Howk in the 1850s, and ever since then have been a therapeutic attraction for sore bodies, hangovers and rheumatism. A former Sierra County Sheriff, Jack Campbell, bought the 160-acre hot springs ranch in 1874 and developed it into a spa and retreat for travelers of Northern California, which it remains to this day. Matters didn’t end well for Campbell, as he was gunned down in September 1882 while relaxing on the porch of the nearby Randolph hotel, a victim at the hands of shooter J.J. Stubbs, who ended up serving 18 years in San Quentin for murder.

The resort almost succumbed to the Cold Creek wildfire in 1959, but was saved thanks to a hot shot fire crew flown in from Arizona. For a few days during the Fourth of July weekend, the historical resort was in jeopardy of being a total loss. Legend has it that when the resort hotel building was threatened, the owners took their entire beer and liquor inventory of considerable value and threw it all in the bottom of a six-foot deep swimming pool to save it. The sweaty and parched firefighters quickly discovered the submerged cache, so they went for a cool dip in the pool, emerging with bottle after bottle of booze, passed from man to man all the way to the fire line. By the time the blaze was extinguished, more liquid had passed down the firefighters’ gullets than water on the actual fire; a small price to pay for saving this historic resort.