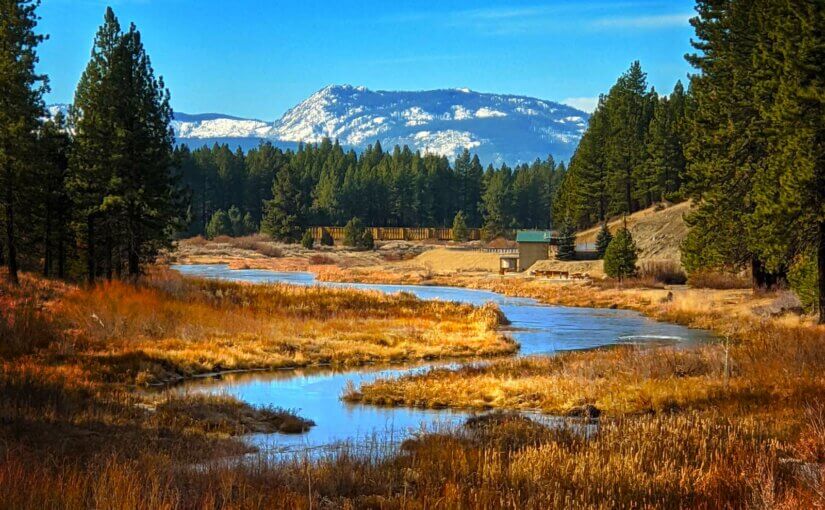 The city of Portola (pop. 2,104) is situated at 4,856 feet elevation near the headwaters of the Feather River, a federally recognized Wild and Scenic River, with Smith Peak to the north and Beckwourth Peak to the south. Named after Gaspar de Portola, the first Governor of California, Portola has much more in common with logging and railroads than it does the Spanish colonial province of the 18th Century.

In the 1850’s, the local legend fur trapper and explorer James Beckwourth was considered the first non-native to settle in the area, with a unique mixed heritage of American Indian and African American. A self-described “mountain man”, Beckwourth scouted the lowest elevation pass across the Sierra Nevada, with today’s California Highway 70 running through the heart of Portola, marking the route Beckwourth established. Beckwourth’s cabin was an outpost and stage stop for prospectors in the Gold Rush and still stands today along the Feather River a few miles east of Portola.

It wasn’t until the late 1800s that the yet-to-be-named Portola emerged as a community, thanks to the need for lumber in nearby Reno, Nevada. The abundance of lumber mills in the area gave rise to the railroad, and by 1910, the Boca and Loyalton, the Nevada, California and Oregon and the Western Pacific all linked their rail lines into Portola. The town’s name was thought up by the daughter of a Western Pacific engineer and became official in 1910.

But if it weren’t for the surveying and engineering wisdom of Arthur Keddie, Portola may not have become the railroad hub it is today. Keddie was responsible for engineering the Feather River Route for the Western Pacific, a narrow and treacherous run through the Feather River Canyon from Oroville to Quincy, making the Western Pacific part of the trans-continental railway, with Portola as a crucial stop.

Although Keddie scouted the route in the 1860s, following the footsteps of Beckwourth, it wasn’t until 1909 that the line was completed. The Feather River Route marked a significant engineering achievement, as it was an alternative to the Donner Pass route, and ran a gentler grade as well as being 2,000 feet lower in elevation than Donner Pass.

The Western Pacific Railroad Museum in Portola, located inside a former locomotive facility, documents this rich railroad history, featuring more than 30 locomotives, and a couple dozen passenger cars and cabooses.

Aside from its railroad history, Portola is rich in natural beauty. The volcanic spires of Beckwourth Peak tower over the town to the south, while less than 10 miles to the north, Lake Davis boasts world class fishing, along with hundreds of miles of scenic dirt roads connecting to even more remote lakes and streams.