History of Johnsville – Of Skiers and Miners 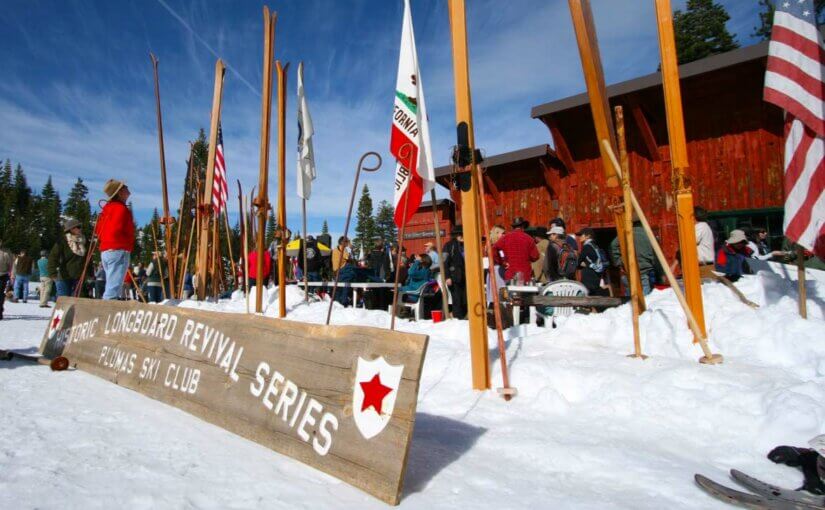 The tiny hamlet of Johnsville, set along Jamison Creek at 5,180 feet elevation in the shadow of Eureka Peak, is known for two things: mining and skiing. Some of the earliest discoveries of gold in California occurred in Johnsville, named after William Johns in 1876, a brilliant manager of the Eureka Mine who made the operation incredibly efficient and profitable for its London-based Sierra Buttes Mining Company investors, who also owned the successful Sierra Buttes Mine in Sierra City.

Eureka Peak was originally known as Gold Mountain, aptly named considering the tens of millions of dollars in gold the mountain produced in the 1800s. Sixty-two miles of tunnels were cut into the mountain, tunnels mapped by legendary railroad surveyor Thomas Keddie, who pioneered the eventual Western Pacific Railroad route through the treacherous Feather River Canyon between Oroville and Quincy.

Once extracted from the tunnels, the rich ore was sent downhill on cable tramways and ore buckets to the enormous Mohawk Stamp Mill, built in 1876, a 60-stamp mill site that still stands today at the Plumas-Eureka State Park. The state park museum building, originally built as the miner bunkhouse, is a fascinating stroll through history, documenting the stories of these industrious pioneers who also played a pivotal role in creating the sport of downhill ski racing.

In the 1850s the mountains between Johnsville and La Porte were completely stripped of all trees in order to build dozens of mining camps and support hundreds of miles of tunnels for mining operations. In the wintertime, miners were snowbound, sometimes 30 feet deep, and needed an activity to keep them sane. In 1853 Charles Nelson, a Norwegian-born pioneer, introduced local miners to Longboard skis, originally used in the Telemark region of Norway to help residents get around in the winter.

But the miners had something more exhilarating in mind, staring up at the towering, denuded slopes of Gold Mountain; they were going to race each other straight down the mountain to see who could go the fastest. This crazy idea became the birth of downhill ski racing. At the time, some of the fastest humans on the planet were Longboard racers in the Lost Sierra, clocking astonishing speeds of up to 90 miles-an-hour, running 12 second quarter-mile straight line downhills on their “snowshoes”.

What enabled them to reach these unbelievable speeds was what they called “dope”, or wax, the recipes of which were more valuable than gold itself, as prize winnings could be as much as $1,000 (a lot of money in the 1860s). Champion Longboard racers were nothing without their “dope man”, master mixologists who understood changing snow conditions and what kinds of ingredients to melt down for the fastest dope.

In addition to being the birthplace of downhill ski racing, local legend also has it that Eureka Peak may have been the site of the very first ski lift in the world, with miners loading themselves into the ore buckets attached to a tram cable, getting a ride to the top.

This tradition of Longboard racing is alive and well today at the Plumas-Eureka State Park, home to the historic Johnsville Ski Bowl. Thanks to the Plumas Ski Club, the Longboard Revival Series celebrates history by reenacting these side-by-side races in period-correct attire strapped to period-correct Longboards, many of which were hand-shaped by the skiers themselves. And yes, the wax skiers use is still a closely guarded secret, as everybody in Johnsville knows, “Dope is King”.

More information on the current Longboard races at Johnsville Ski Bowl can be found at PlumasSkiClub.org